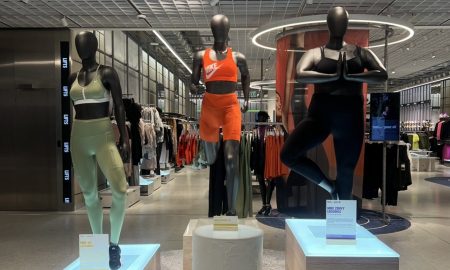 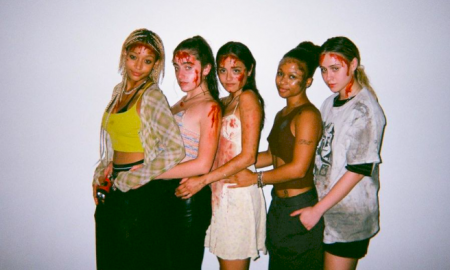 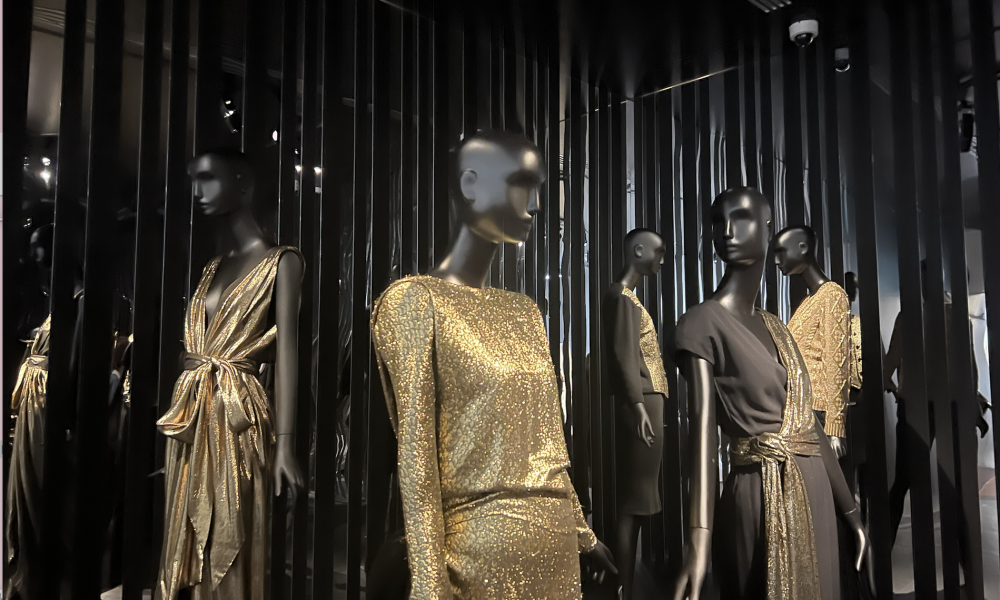 Located in the legendary Hôtel Particulier at 5 avenue Marceau where Yves Saint Laurent spent nearly thirty years designing his collections from 1974 to 2002, the Gold exhibition has been open to the public since October of 2022 and will end in May 2023. The museum celebrates Yves Saint Laurent collections but most of all how gold has played a role throughout the majority of his designs. The exhibition presents gold through couture, ready to wear dresses, accessories and even perfumes featuring materials radiating gold: lace, sequins, leather and more. 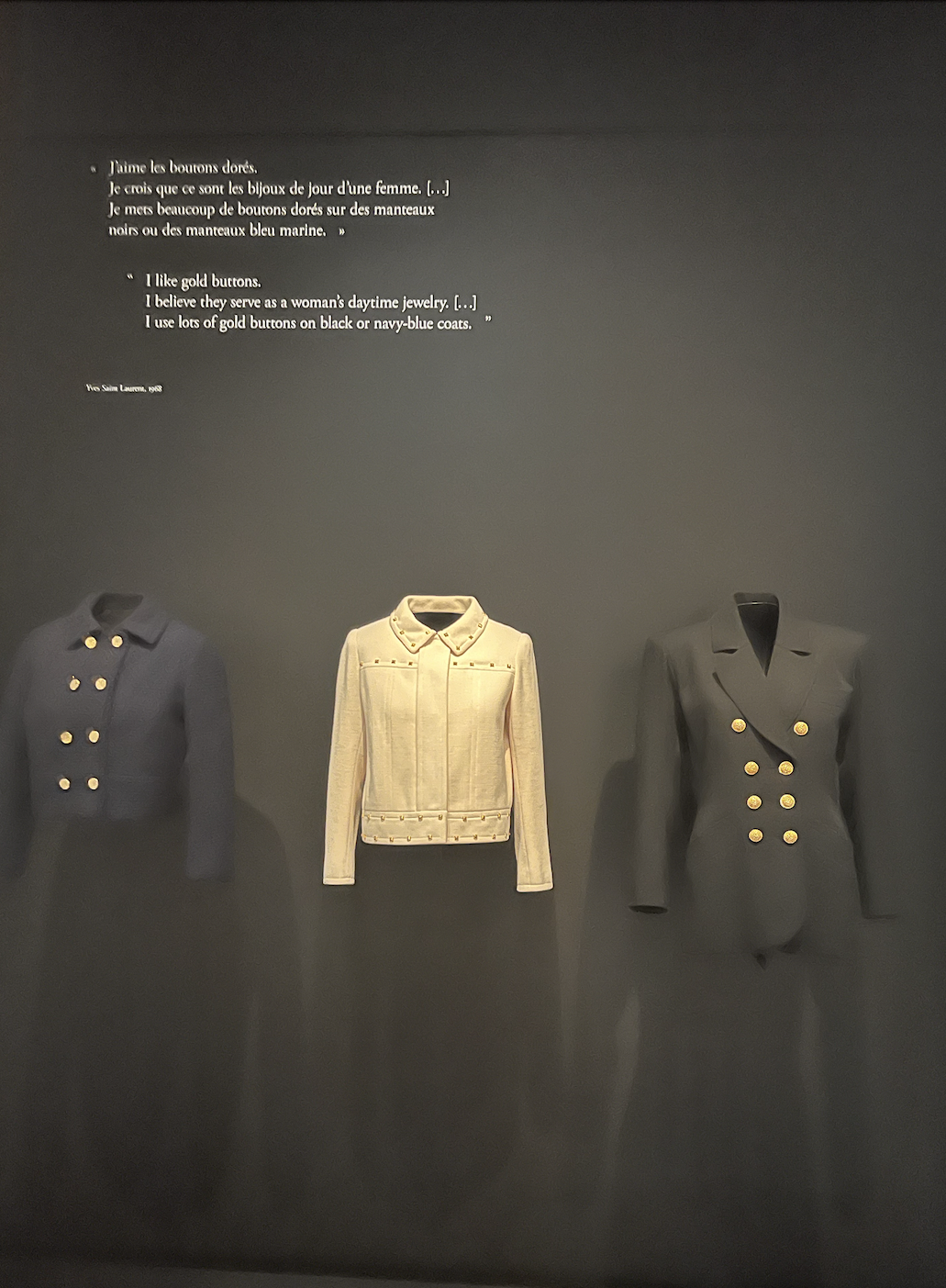 Every room of the exhibition tells a different story starting at the beginning with a timeline of all his accomplishments leading up to his final show. Starting at one of his first designs from 1968 which are the lovely black and navy coats. Saint Laurent says himself,“I like gold buttons, I believe they serve as a women’s daytime jewellery, I use a lot of gold buttons on black or blue-navy coats.” His first collections already show off his love for gold and in just a short few words. The first ensemble, being a garment that is traditionally a staple from a man’s wardrobe, this is the one of the many ways he had adapted it to his own tastes and made it something that a woman could wear, enhancing tuxedo jackets. These were one of Yves Saint Laurent’s signature creations.

Yves Saint Laurent wanted to empower the women modelling his clothes but also those that would be buying and wearing them. This reflect on how society was in the 60s with the emancipation of women, women at this time wanted to dress themselves elegantly and Yves made that possible for them and this sparked his desire to curate clothing for not just the wealthy but for everyone. 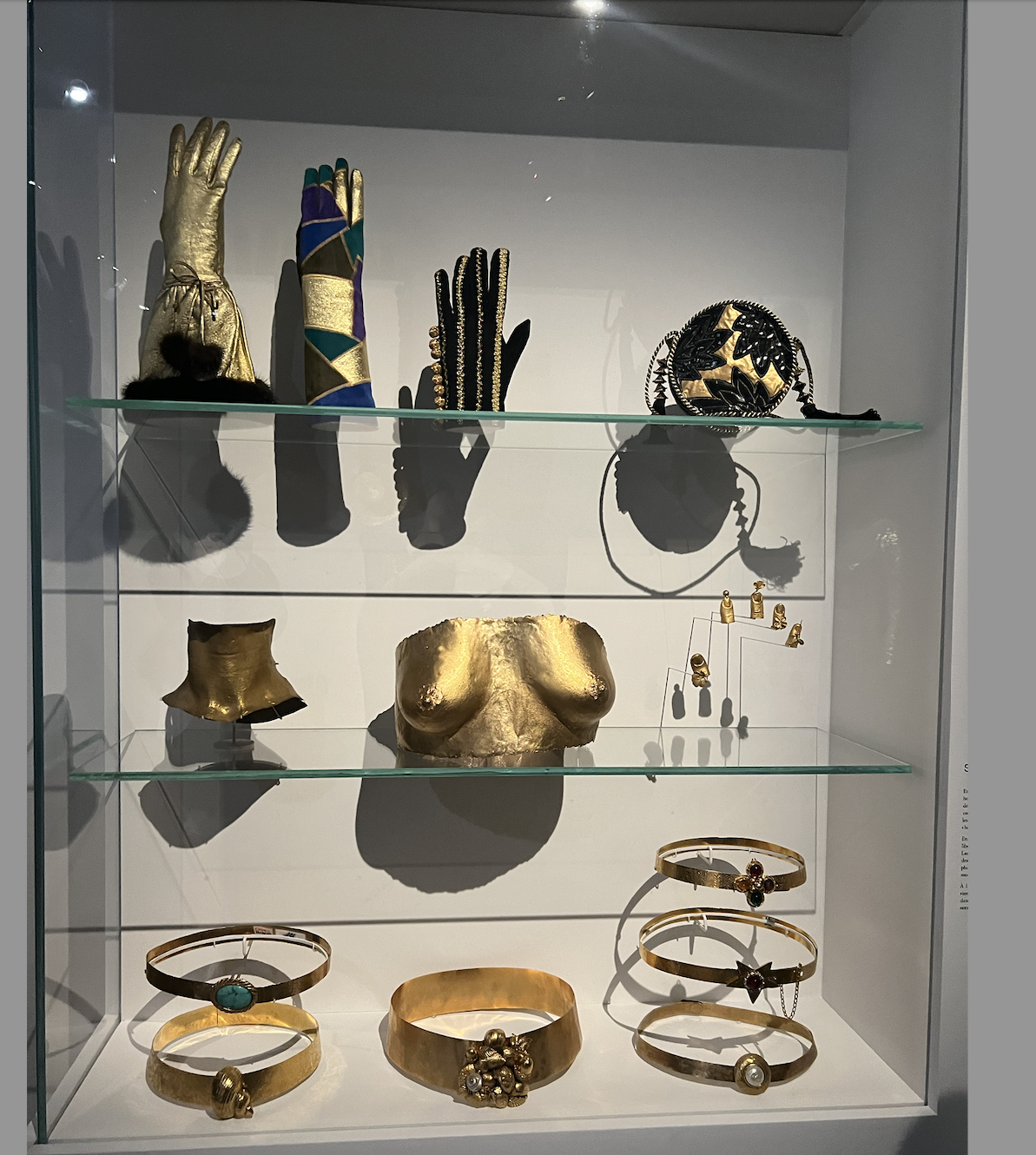 The brand popularised gold and made a spectacle out of it. He highlighted women being free in movement and this reflected a lot in the clothing styles being produced. Gold was not only used for female empowerment only but also is seen in warrior or military uniforms. 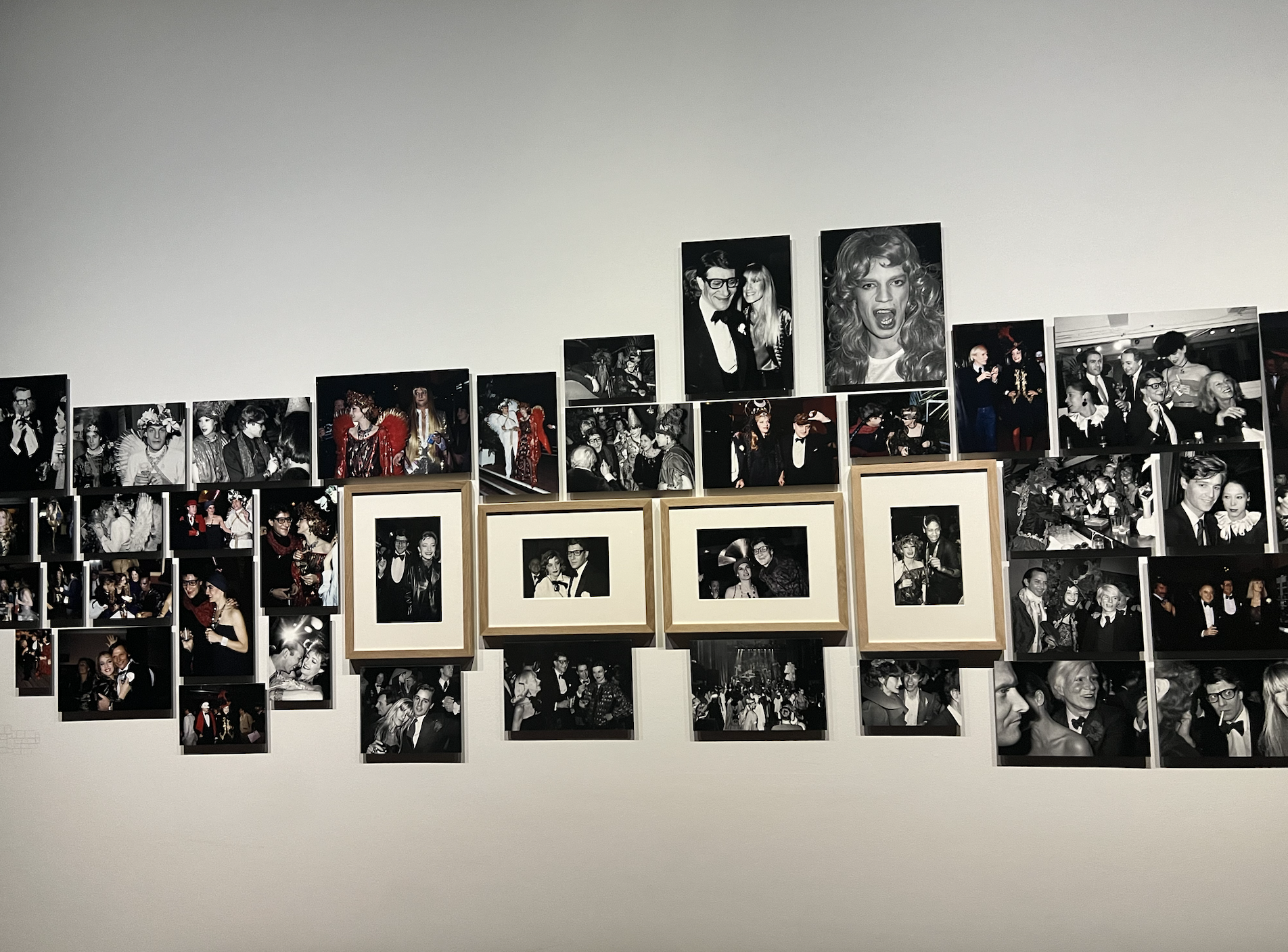 In the ‘Time to Shine’ part of the exhibition it explores the nightlife scene from the 60s to the 80s with evening pieces delegated around the room showcasing the different silhouette’s that Yves Saint Laurent worked with. On the wall there are images of  Saint Laurent and friends that he made in the industry.

In the studio at 5 avenue Marceau where Yves Saint Laurent spent every day, we are able to see his design process just as though he were there in the room. Everything still preserved from when the couture house closed back in 2002. As creatives its very inspiring and almost like being in someone’s thoughts. It was somewhere that he spent the majority of his time and other than his clothes, this is another part of him that lives on. 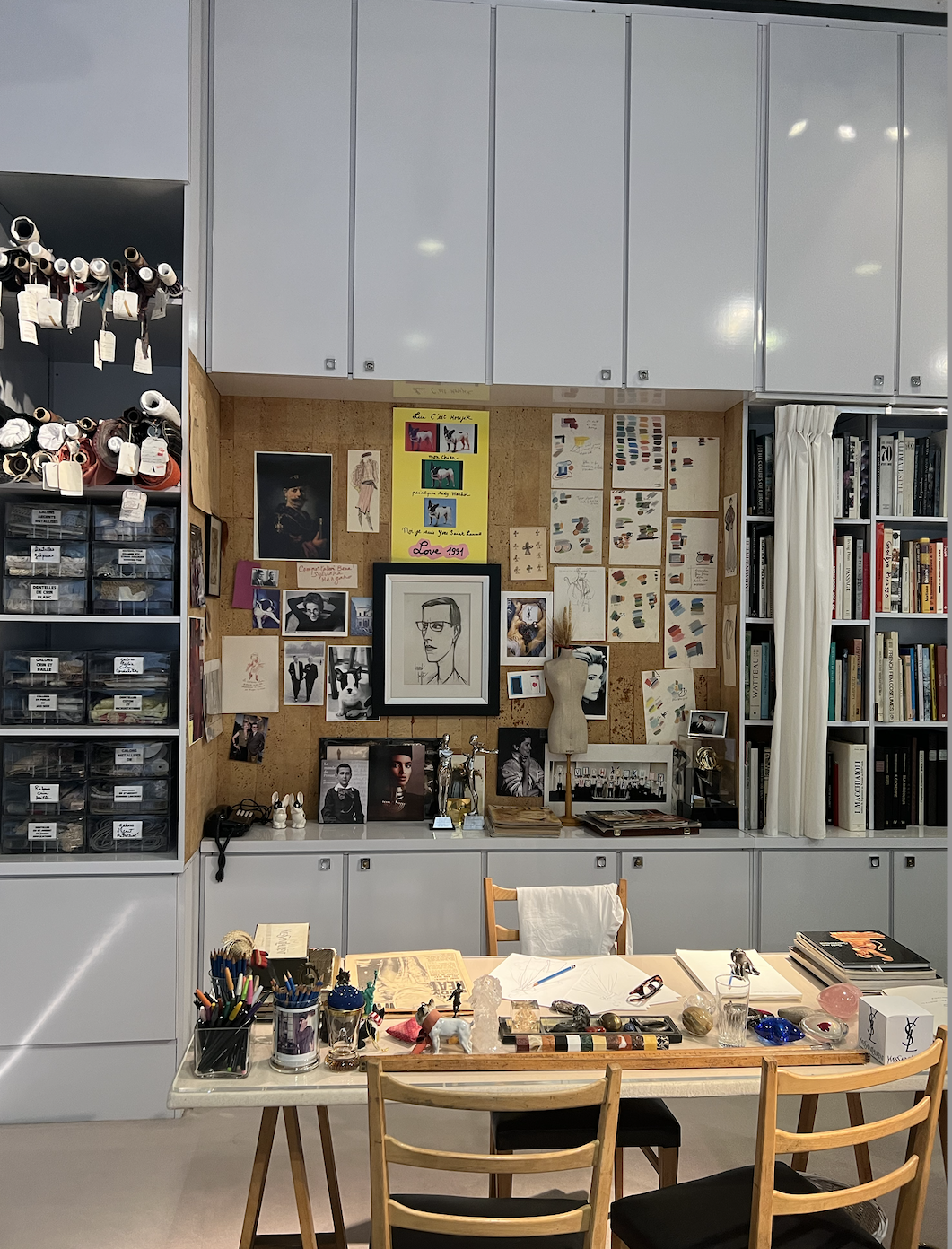