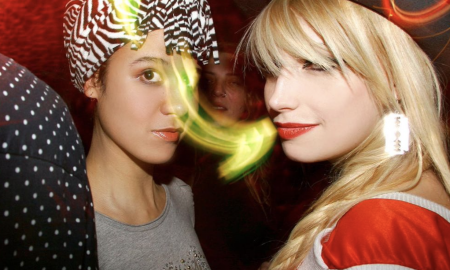 The performative effortlessness of the Indie Sleaze aesthetic 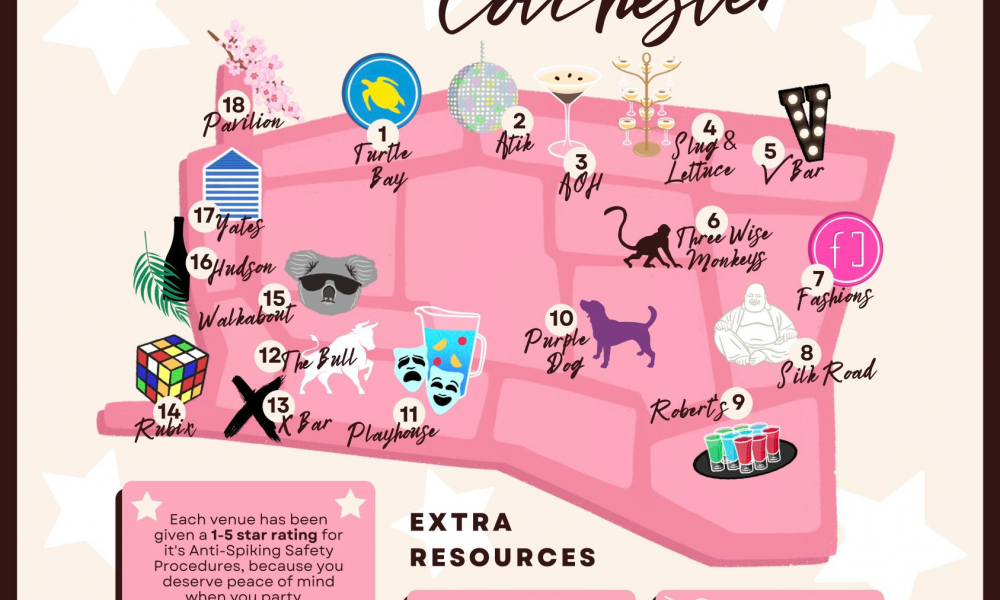 Just as we thought 2021 could not get possibly any worse for women’s safety, after the horrific Sarah Everard case, it turns out yes, yes it can get worse.

An increase in drink spiking in the UK has been reported including the emergence of spikings via injection. Although there have been cases where men have also been victims, the majority of spikings have targetted women – particularly students. This is creating a lot of anxiety for those who just want to go out and have a good time.

In response to the increasing incidents, we have seen a surge in new organisations designed to  promote and aid women’s safety, such as Strut Safe and the Good Night Out Campaign. Also, last month we saw The Girls Night In movement, where many feminist activists took it upon themselves to organise a national boycott of clubs on October 27. While these organisations are working towards creating a safer environment for girls in a bid to prevent future spikings, which is vital at this scary time, it raises the question: why should women be the ones to stay in over the weekend?

Mia-Rae Smith, an illustration student at London College of Communications, has created an Anti-spiking Nightlife Guide for Colchester, Essex. Smith has rated popular venues on a scale of 1-5, based on the measures that they have put in-place to prevent spiking. The guide is designed to help people make an informed decision whether to visit the venue or not, allowing them to put their safety first on a night out. This initially started as a university project. However Smith realised that the guide could be a really important tool, especially since Colchester is a university town and many spiking victims are students. 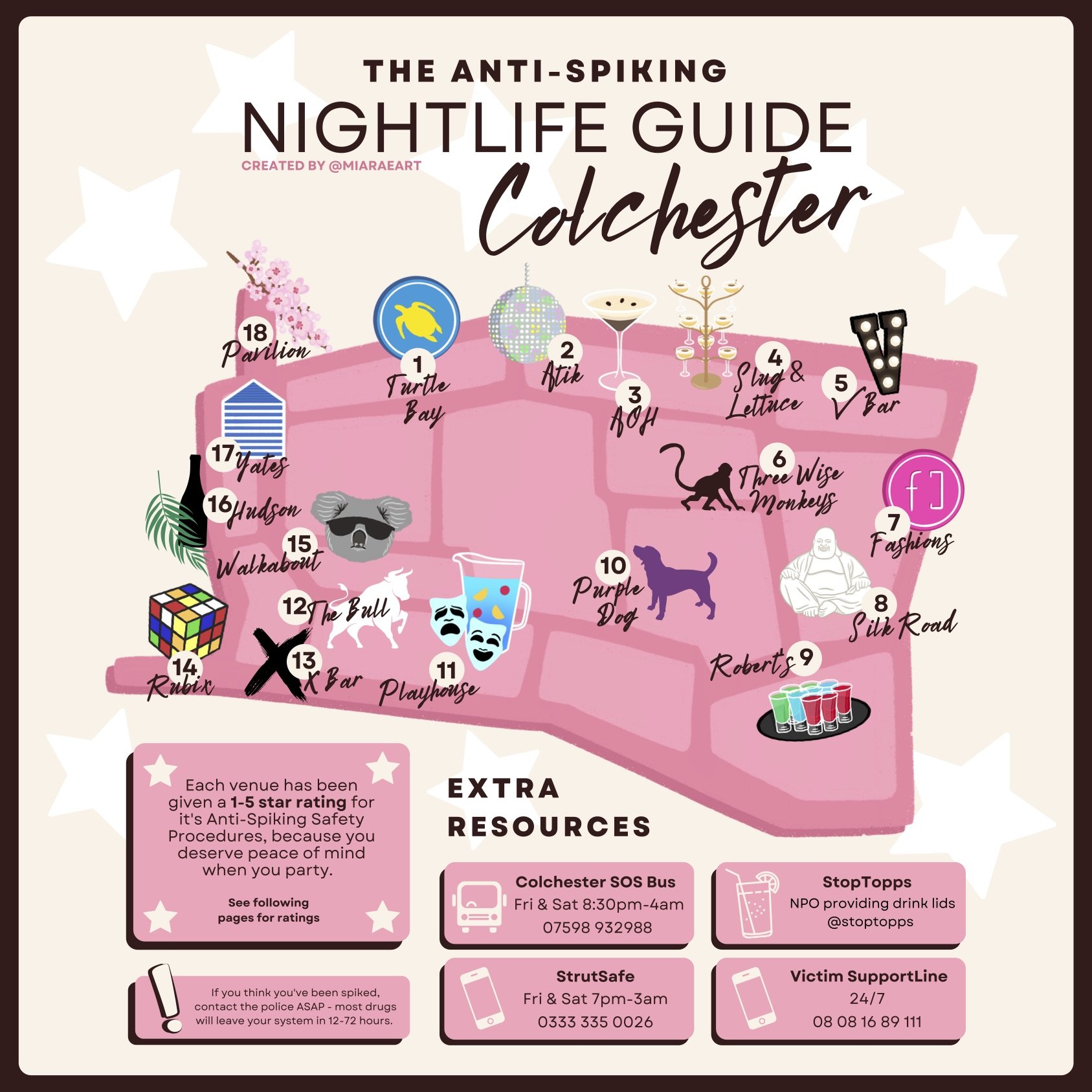 Smith explained how she created the guide which hopefully inspires others to create their own for their hometowns: “So, I drew all the little icons. A lot of them were just from inspiration because I’ve been to the places before and knew them. I was like: ‘Oh Pavilion has the blossom trees, everyone loves that.’ They’re kind of little iconic things for each place so I drew those on [digital illustration tool] Procreate.” She then discussed how she created the final outcome: “I then put it all together in [graphic design platform] Canva, which is the best… then it’s just a PDF that I’ve made.”

Now, the guide is aesthetically pleasing on the eye, but what does it actually mean?

Each venue has a rating out of five stars and each star represents a key measure that every venue should have in place to ensure customer safety. These consist of: searching, staff training, protection devices, discretion schemes and a safe space. When deciding the rating systems, Smith was given advice from her friend who is the president of the Feminist Society at her university, to make sure what she included was appropriate as well as vital. 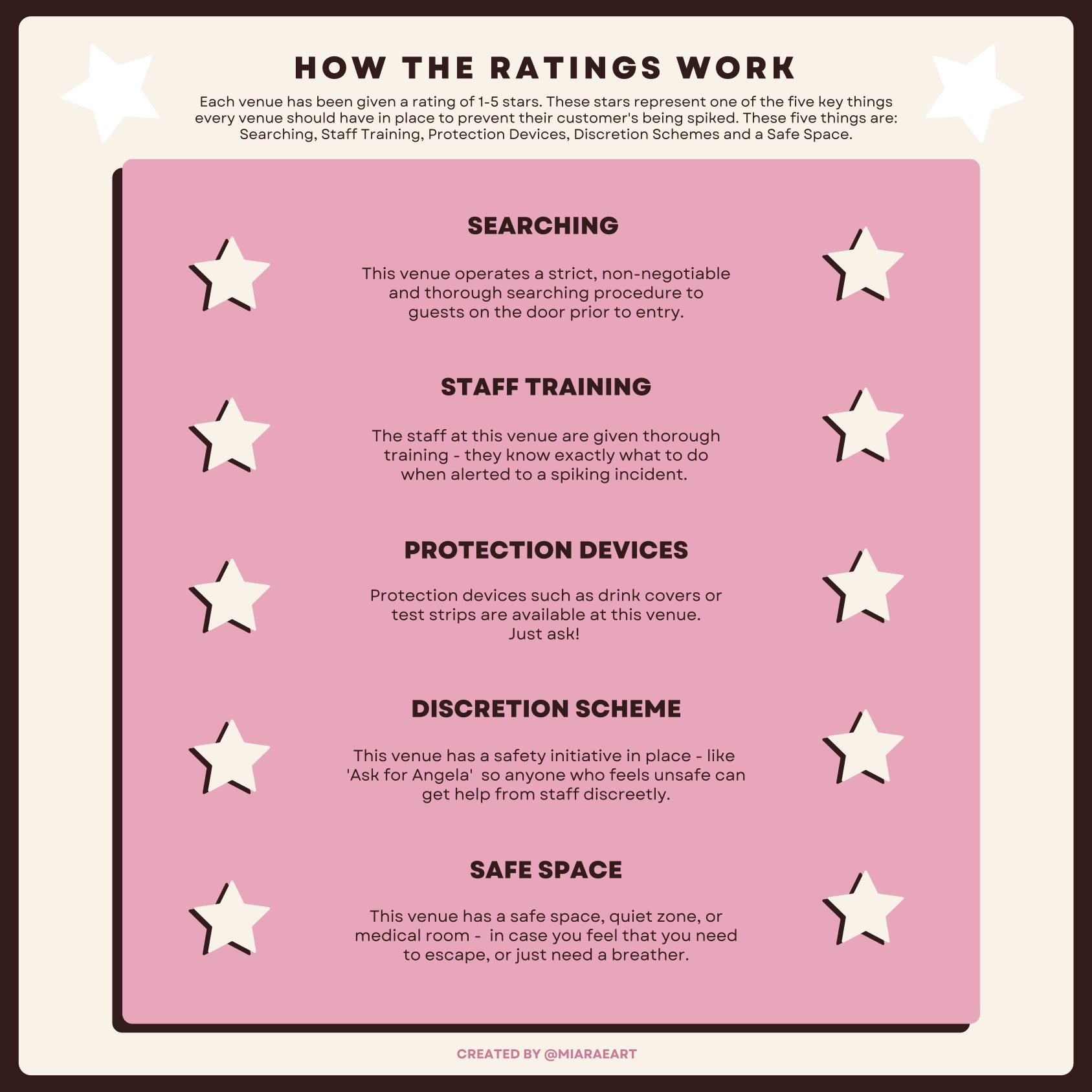 “I was talking to her about the idea and what she thinks would be best options… I’m trying to learn a lot about it now but she knows a lot about intersectional feminism as well and so I wanted to make sure that the things I included were appropriate and so she helped me come up with the categories,” says Smith.

Smith also explained how they debated a lot about the searching category and whether to include it or not: “Neither me nor her think that increased searching [of people entering venues] is likely to be beneficial, but I did have to include it just because it’s something that the venues were all mentioning and bringing up that they had in place.”

People can also find searching quite difficult, she said, mentioning how it can be quite harsh on marginalised communities and it can sometimes be traumatic. Also, let’s face it, the ‘places’ that people tend to hide things won’t be searched in a doorway to a club or bar.

Although all nightlife venues should aim to have all five categories, Smith stated that in her opinion the most important point is staff training: “I’ve worked in two pubs, and I wasn’t given any training on that [spiking] and I know that I would have probably got in a flap if that had happened… I really wouldn’t know what to do,” she says.

After deciding on her categories, Smith reached out to most popular venues in Colchester and asked which of the five categories they have in place. See the image below for the ratings: 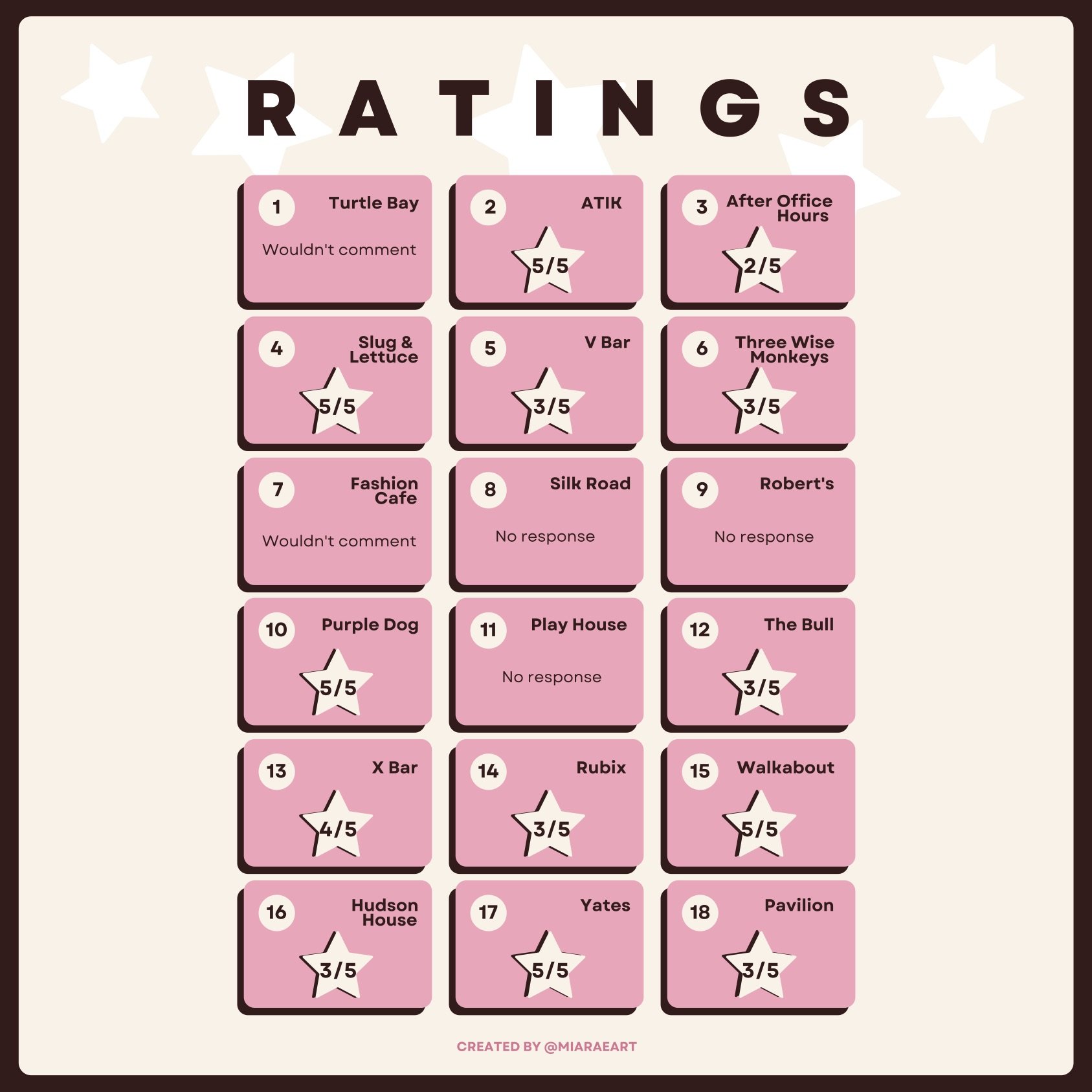 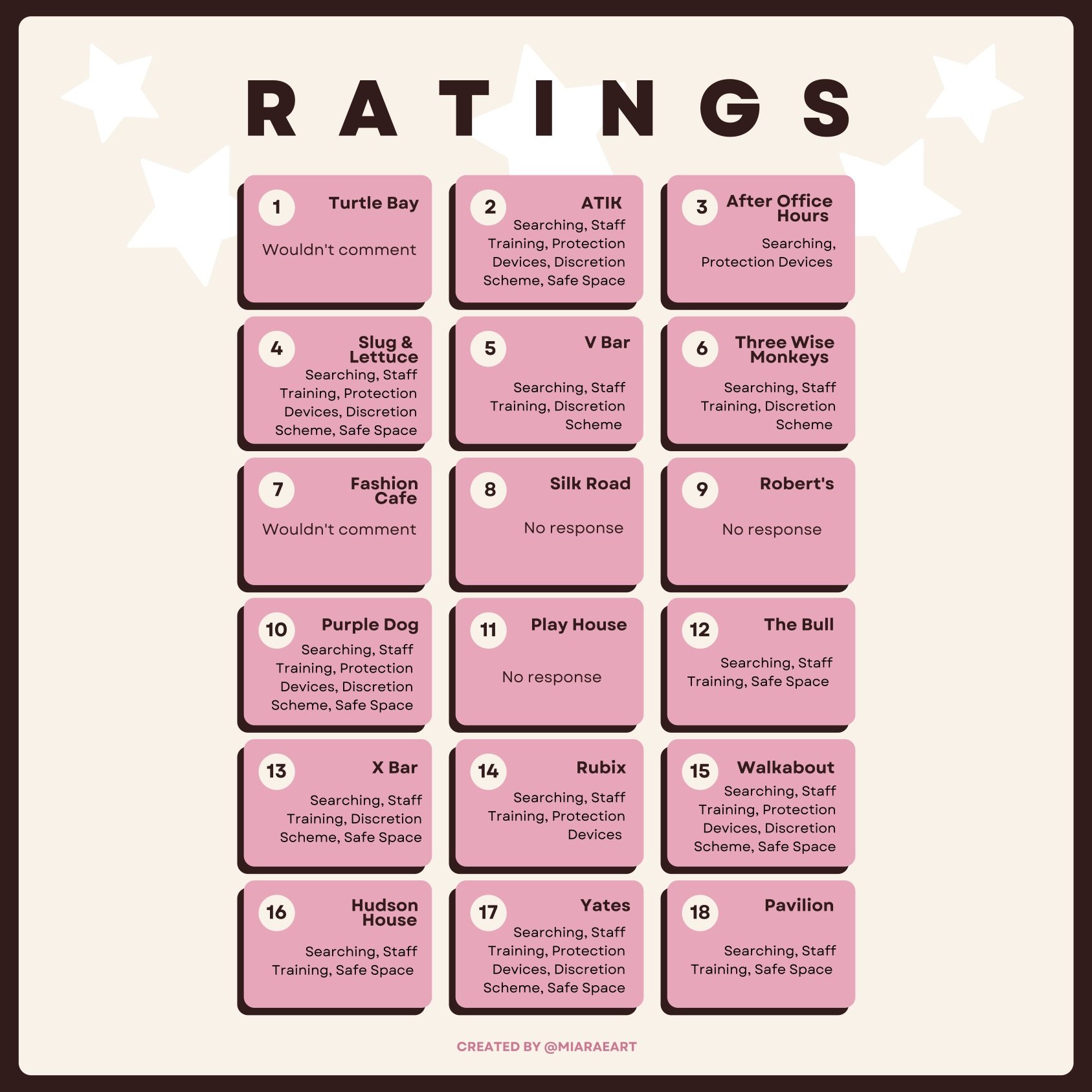 A common response from the venues that haven’t received 5/5 was that they are trying to get protection lids, but due to the high demand for these it is hard to get hold of them at the moment. Unfortunately, a lot of venues, she recalls, weren’t very forthcoming in giving up a lot of information: “The majority of cases were like ‘who are you’ and wanted to ask me questions before they told me anything… some of them were like ‘we can’t comment on this; this is not an official rating’.”

Angered by many of the responses, Smith researched for any accredited rating system for nightlife venue safety measures and discovered there was nothing. Although she wishes she could create more guides for across the UK, this isn’t particularly doable for one person. As well as this, in her disclaimer she states that she has trusted what the staff have told her and she hasn’t verified in person if it is in place. 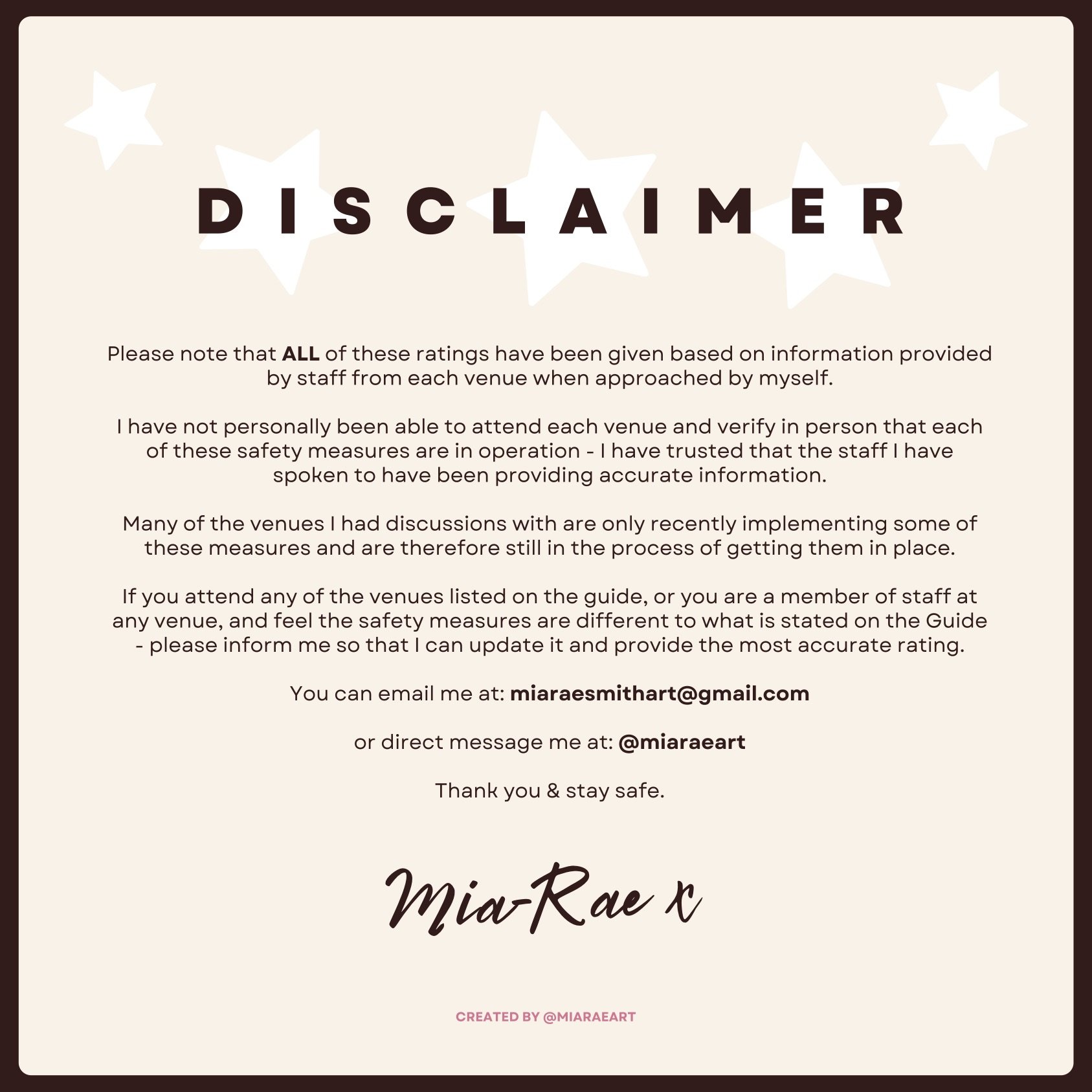 A 20-year-old recent spiking victim, Grace Langdon, thinks that: “The guide is an amazing idea, but it shouldn’t be based on what the actual club/bar has as ‘procedures’ because they clearly aren’t all being followed,” she says.

Similarly, Vivian Hui, another unfortunate victim to being spiked in Colchester recently, also doesn’t believe that bars and clubs’ procedures are being followed like they say they are in the guide. In her experience, the staff had begun to help her although they ended up just taking her outside and left her on her own, even when she was unresponsive. “Luckily I was with a group of friends who looked after me,” she says. “By looking at the guide it does not reflect the 5/5 rating it has been given which makes me think, exactly how thorough are places with their training and plan of action when it comes to someone being spiked?”

Therefore, Smith decided to create a petition for there to be an official rating system, similar to the food hygiene rating systems that would involve inspections. 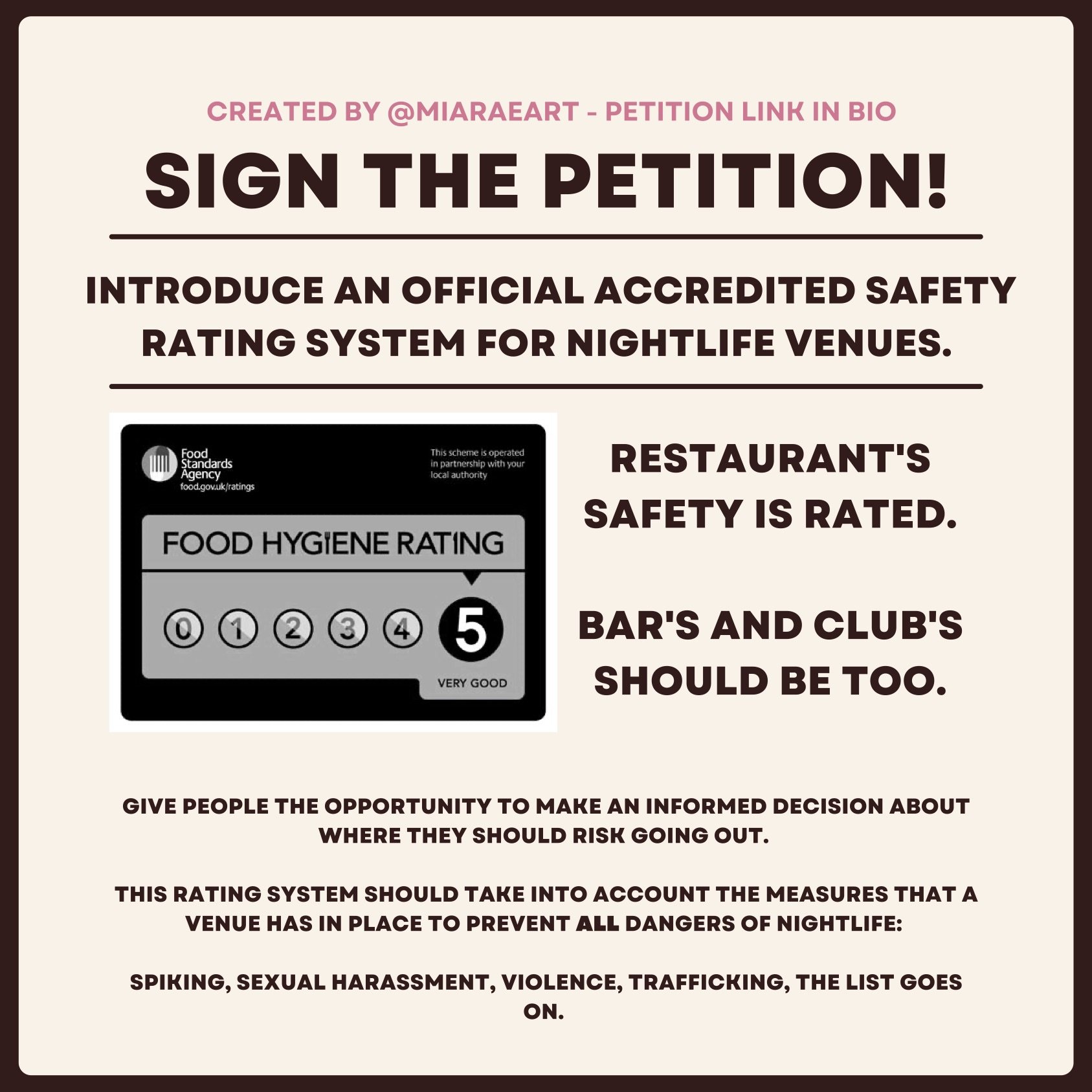 “The government should require licensing authorities to inspect licensed venues regularly, with the results added to a national safety rating system, like the food hygiene ratings for restaurants. This should take into account what measures the venue has to tackle issues like spiking, sexual harassment, trafficking, drug use, violence to name a few.

“There should be an indicator of a venue’s safety so that people can make an informed decision on whether they would feel safe to visit- just as the Hygiene Rating does for restaurants. Preventing spiking, sexual harassment etc is just as, if not more important than hygiene standards, so there should be an accredited way to assess it.

“Having this sort of rating would give venues incentive to ensure that their premises have effective precautions in place to protect their customers from harm.”

The petition has received over 400 signatures so far after being posted on November 14, and overall has received a positive reaction.

Strut Safe commented on the post: “Hi there! Such an amazing resource, thank you for putting this together.”

However,  there have been a few negative reactions: “The only bad responses I’ve had, they’re not necessarily bad, just girls saying that they don’t agree with some of the ratings which is fair enough,” adds Smith, as well as recalling a Facebook page that refused to post the petition which she found shocking.

Overall, Mia-Rae Smith’s idea is undeniably a great step forward towards tackling the increase in spiking. Vivian Hui agrees that the petition is something that she definitely will be signing in a bid to help ensure safety when she goes out and to help ensure that others don’t experience what she went through: “I am someone who enjoys going out with friends whether it be for a few drinks or ‘out-out’, either way it would be nice to be able to do so without that extra worry in my head – only thing I want to worry about is where I’ll be getting my cheesy chips after!”

The petition needs 10,000 signatures for the government to respond and 100,000 for it to be considered for debate in Parliament. See attached link to sign the petition below: